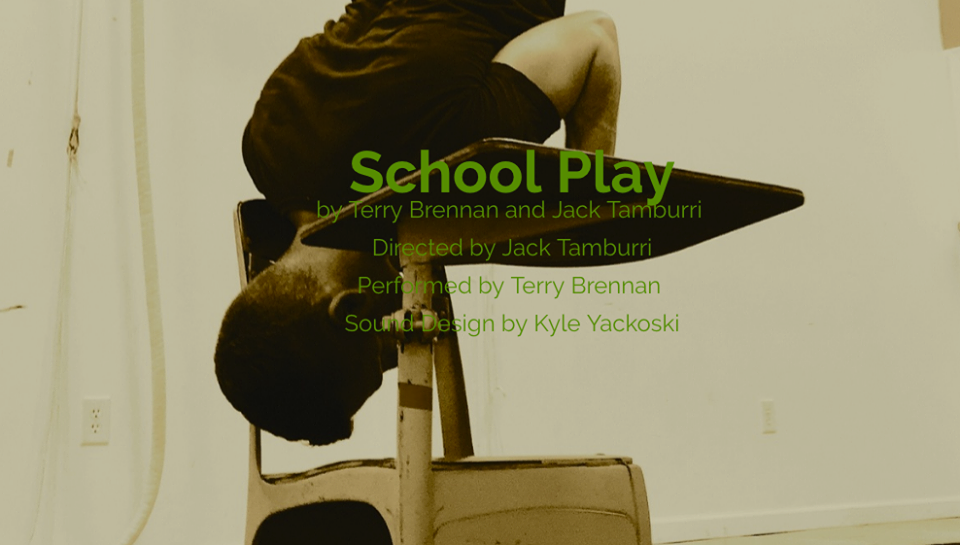 Remember the kid who sat in the back of the class? He had his own secret language, thought he was a spaceship and his face was usually covered in snot. You know, the hopelessly hyperactive little guy with zero self-control, who just couldn’t get down with the whole “passive listening” thing? SCHOOL PLAY is Tribe of Fools’ hilarious and heart wrenching ode to that little trouble-making anti-hero.

Terry Brennan, stars as Terry Brennan, a spastic youth caught up in the dregs of our rigid education system. He is constantly reprimanded for his outbursts all the while pining to impart the long and storied history of parkour unto his prepubescent colleagues. His performance can only be described as a bolt of lightning.

From the moment he explodes onto the stage I was enthralled at his channeling of the A.D.D. addled youth and the battle of wits which ensues between him and his obstinate nemesis (teacher), Miss Jackson. One can only assume the real Terry Brennan knows all too well the pitfalls of being such an energetic youngster; a former class clown that finally found his way out of detention, perhaps. Whatever the case may be he continually struck me as a long lost, modern day Marx brother, delivering breathtaking feats of physicality and comical wordplay all with the warmth and grace of a teacher’s swift backhand.

However, SCHOOL PLAY, directed by Jack Tamburri, is not just a frenzied, one dimensional, “Look at me! Look at me!” hour long onslaught of bells and whistles. Terry’s classroom terror is offset by moments of heartbreaking truth. For instance, throughout the play Terry receives pessimistic messages via an origami fortune teller (you know what I’m talking about, playgrounds were rife with these things). It is unclear, however, if these messages are being sent to him from other students or are a glimpse into Terry’s fraught state of mind—a clever underhanded way of introducing the very real, very unfunny plight of Terry and his fellow “alternative learners.”

Thankfully though, despite the barrage of negative reinforcement, Terry, ever the energetic optimist, is able to overcome his brief bouts of sour puss-dom. For instance, his quizzical onslaught regarding black holes produces one of the plays most brilliant moments wherein Miss Jackson, stripped of her emperor’s clothes, is unable to explain what goes on inside a black hole. Young Terry, wild eyed, waxes philosophic, “What else don’t you know?”

I loved watching Terry gracefully romp about the stage performing gravity defying headstands and swing dancing with his school desk; however, it was his intellectual rebellion that excited me most. Terry’s refusal to be subjugated within the elementary school caste system and his willingness to question everything, at any cost, were for me, SCHOOL PLAY’S most impressive acrobatics.