“How do we measure time? What is contained in a moment? And just what the heck are we waiting for, anyway?” Nicole Quenelle dives into these questions, and cake, with her SoLow piece REFRESHMENTS WILL BE PROVIDED, a work-in-progress excerpt of The Long Tides, set to premiere in the 2016 Philadelphia Fringe Festival.

We got the SoLow down on time, refreshments, and the SoLow-Fringe relationship ahead of the show. [Plays & Players Skinner Theater, 1714 Delancey Street] June 16-18, 2016; nicolequenelle.com. 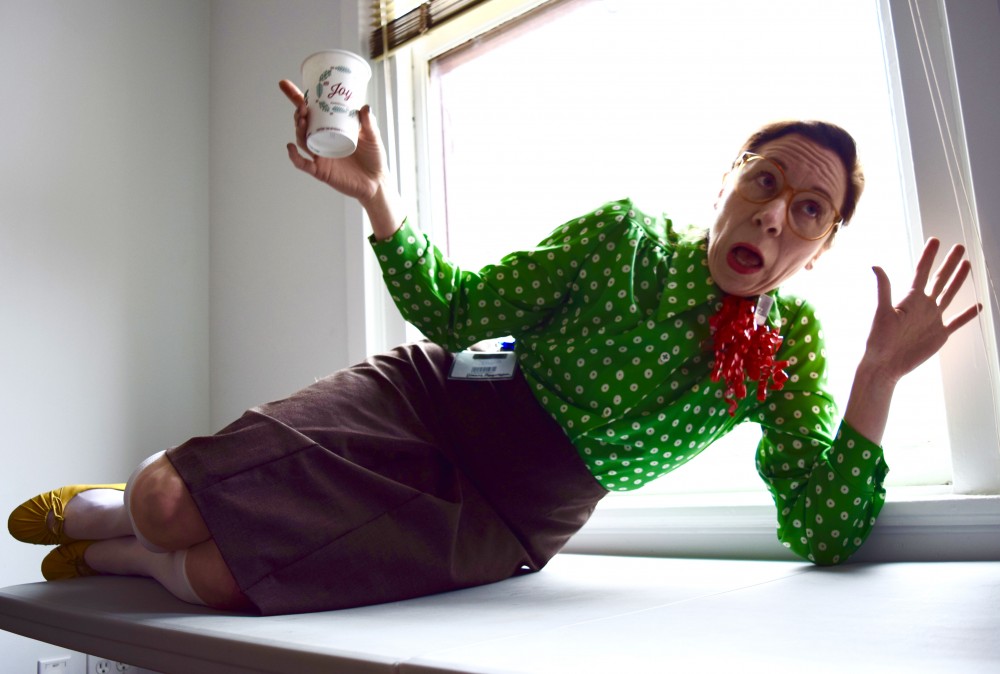 Nicole Quenelle: REFRESHMENTS WILL BE PROVIDED is a work-in-progress excerpt of The Long Tides, which is a piece primarily exploring time. I started working on it over a year ago, and it will premier in the Philly Fringe this September. The piece centers around Joann Merriweather. Joann works in the call center of Building 14—and she has for a very long time. One of my initial sources of inspiration for the piece was corporate seminars, so I have Joann stepping into the role of leading a time management seminar for the audience, cast as her co-workers. She’s never done this before, so she’s not exactly in her comfort zone.

Phindie: Will refreshments be provided?

NQ: Yes, there will be coffee cake made from Joann’s own personal recipe.

NQ: I really like that it encourages risk taking, both for the artists and the audiences. It’s super low overhead and low expense, which is great for everybody. You can see a lot of shows without spending a lot of money. And the intimacy of most of the shows often necessarily challenges the role of the audience, which I think is really great. Also, given the timing of the fest, many artists are starting to use SoLow as an incubator of sorts for the Fringe, which I think is cool. Several of us in this year’s fest are leveraging SoLow in this way, with works in progress that will continue to be developed over the summer for the Fringe.

Phindie: How will this piece differ from your longer Fringe show?

NQ: REFRESHMENTS is really a bit of a research excerpt for The Long Tides. Even though it’s a piece in and of itself, on a practical level REFRESHMENTS exists to help me explore the corporate seminar inspiration in a deeper way, and to figure out Joann’s relationship to the audience and how parts of audience participation and interaction will work. The Long Tides has a much larger scope, so to speak. It will include Joann, but also a few other characters that I’m working on, along with some overlapping narrative (both personal and fiction). I have a lot of work to do between now and the Fringe, and REFRESHMENTS is a big piece of that—and what I learn from the audience with this piece will have a direct impact on the work I do over the rest of the summer.

NQ: Hmmm… oh. I really like to read interior design blogs and eat ice cream. It relaxes me and then I fall asleep dreaming of renovated kitchens.

Phindie: Time is a theme of REFRESHMENTS WILL BE PROVIDED. What kind of watch do you wear?

NQ: Oddly enough, I don’t. Maybe I should. I used to have a Swatch when I was like 16 and it had those different colored face plate things so you could coordinate your watch to your outfit. That was fun.

Phindie: Are you excited by any other shows in this year’s SoLow Festival?

NQ: Yes! So many of them. There are actually several SoLow shows at Skinner Studio (upstairs at Plays & Players) where I’ll be performing—and I’m hoping to see them all. And in particular, I’m excited to see Corinna Burns’s Bind. I really like Corinna’s autobiographical writing—and she’s a great actor, too–and I’m really glad she’s presenting more of her own work. Also, super excited about Andy Thierauf’s The Post-Modernist Percussionist. I saw Andy present work at a Scratch Night several months ago, and I was blown away. Plus he uses lots of found, non-traditional instruments which I really geek out over. I’m hoping to see as much work as I can. There’s a lot of great talent on that roster.

Phindie: Yes there is. Thanks Nicole!