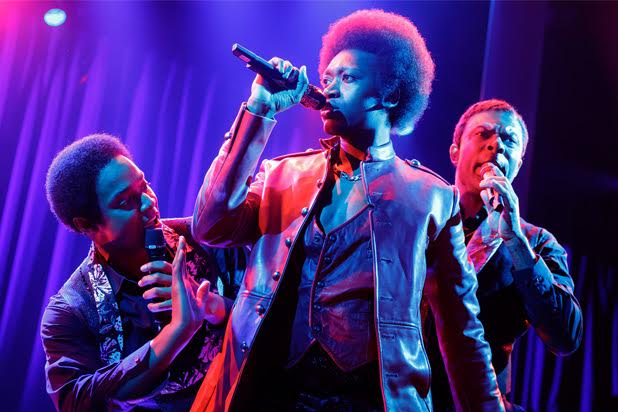 The action transpires at the nexus of tradition, belief, protest, crass commercialism, and rock ‘n’ roll, shedding light on differing views of the budding Civil Rights movement within the black community.

Joanna Settle, who directs the show, is the director of the Ira Brind School of Theater Arts at my alma mater, UArts. And Thom Weaver, whose work Philadelphians know well, handles the lighting design. Ms.Settle has worked with the celebrated Stew/Rodewald musician-writer-composer combo on other shows and has been involved with iterations of THE TOTAL BENT since its workshop debut in the Public Lab series in ’12.  Last year it was part of a UArts student festival at the Merriam.

The setup: Papa Joe Roy (Vondie Curtis Hall), a gospel singing star and “healer” in Alabama has a son, Marty (Ato Blankson-Wood), who writes his father’s popular spirituals with lucrative white radio in mind. A British record producer (David Cale) is interested in developing, recording, and seducing (?) the son, a phenom in the throes of questioning everything he once took for granted. Marty wants to emerge with his own thing, and he’s figuring out what exactly that is. When his dad won’t go along with the protest songs he favors, fissures between father and son are exposed, even as both are on the cusp of change. Religion, located somewhere between dangerous opiate and comforting source of personal salvation, is turned on its head, or maybe it’s knocked on its holy ass. Is Marty anti-religion or does he think he is its locus: “I am the way, the truth, and the spotlight.”

Blankson-Wood and Hall are accomplished singers, as is David Cale, who brings a quirky, offbeat note.  Two sharp backup singers/dancers serve as all-around go-to characters. Drummer Marty Beller directs the half dozen or so impressive on-stage musicians, who are intimately tied into the work. These include the show’s creators, Stew (guitar) and Heidi Rodewald (bass). Kenny Brawner is a natural on the keyboard, maybe supernatural.

With its non-traditional thru-line, many events that are evidently important to the plot remain murky. This could be partly because the lyrics are sometimes hard to make out, but it looks like the text is the locus of the (maybe intentional) problem. Why do characters do the things they do?  For example, what’s with the fear of the microphone, and what’s with Mary Magdalene? Director Joanna Settle keeps up the pace and holds things together as much as possible in this soulful, off-linear, and humorously serious work. But the music-driven trajectory with scattered story fragments floating in and out seems more like separate bents than a total bent.

Toward the end, after an awkward pause for the positioning of large stage pieces, the convoluted narrative arc bends, and the musical becomes a rock concert. The music is so entertaining that you almost don’t care that the text is a bit of a rambling mess. Talented actors/singers, a dynamite band, and terrific lyrics buoy it up. “He’s a savior-entertainer, Muddy Waters on the cross.” Later the “he” in the song becomes legendary Robert Johnson. Even if we don’t totally ‘get’ everything, the audience pretty much accepts whatever is going on because this show definitely and profoundly rocks . [The Public Theater, 425 Lafayette Street, New York, NY] May 10–June 19, 2016; publictheater.org.