Through May 22, 2016, Media Theatre presents 1776: THE MUSICAL, an entertaining, thought-provoking introduction to the fights among politicians as the 13 colonies break off from Britain as the nascent United States (read Phindie reviews here and here). Media’s director Jennie Eisenhower—a popular stage, film, and TV actor; director; and history buff—has performed off-Broadway and at regional theaters across the U.S. for over a dozen years. She has won two Barrymore awards and several Barrymore nominations.

In this, the second of a two-part interview (read part one here), we talk to Eisenhower about the history behind the musical and her work on the production. [Media Theatre, 104 E State St., Media, PA] April 13-May 22, 2016; mediatheatre.org.

Eger: Tell us about your casting for this production of 1776. What were you looking for in the actors/singers?

Eisenhower: First and foremost, I was seeking strong actors. I consider this to be a play, predominantly. If people were strong actors and could carry a tune at all, they were contenders. I also attempted to cast a wide variety of personalities. Everyone is so unique in this group with their own quirks and things that make them stand out. That was important to me. All of them are so incredible and I wish I had time to praise them each individually, but there are 26 of them in total.

Eger: Could you give a few examples of some of the most famous Americans during those revolutionary days with whom you worked at the Media Theatre?

Eisenhower: In terms of the leading actors in the piece, it was a dream to get to work with Ben Dibble [who played the lead as John Adams]. We have acted opposite each other, but I’ve never worked as his director before. He is so talented, strong, intelligent, and the ultimate make-it-work actor. If I need him to cross upstage solely for sight-line purposes or something like that, he somehow makes it happen and look organic, even if it is completely illogical. I don’t know how he does it.

Joe O’Brien is the perfect Jefferson. He is the coolest guy onstage and in person—just very dynamic.  Similarly, John Morrison is an incredible Franklin—a very difficult role. At the same time, one has to be all of these: funny, highly intelligent, witty, intense, bawdy, and stately.  It is such an odd mix, and he absolutely captured him in auditions. Then, fast forward to dress rehearsal when he walked out in his wig and costume. I couldn’t believe how he physically transformed into Franklin as well. It was incredible.

Eger: Directing a large cast of 26 actors, with 11 of them also serving as understudies, sounds like an organizational and psychological headache, especially as 1776 demands a strong ensemble performance. What did you do to keep the show moving?

Eisenhower: I think the most difficult thing about 1776 is that every character is important and larger than life. It is difficult to keep the pace of the piece moving if anyone lingers too much in a moment or lays too hard into it. I kept reminding the cast not to play the end of the piece, even though the audience knows the outcome. Independence and the gravity of what that meant for America was not a forgone conclusion, and therefore each moment in the piece doesn’t need to be “deep!”  The actors were very generous about keeping the energy moving and “passing the baton,” as I referred to it.

Eger: Edna Snidebottom, a critic of the DelcoCultureVulture writers’ collective, pointed out that “Peter Stone added two very thinly written roles for women. Under Eisenhower’s direction, the very talented Elyse Langley as Abigail Adams and Meredith Beck as Martha Jefferson find more to their characters than what is written.” Tell us about your input and how it made these scenes so memorable.

Eisenhower: I was very happy when I read Edna’s remarks about the women in the piece. I consider myself a feminist director and never want the female presence in a play to be weak, no matter how underwritten. In casting, one of my main focuses was on women who were able to lend those roles some added depth. We—Meredith, Elyse and I—also discussed the historical inaccuracies in the play, particularly with Martha Jefferson’s character, and then made a pact to be aware of them, but also not to let them get us hung up.  I’m thrilled with both ladies’ performances, and glad they are able to hold their own—amidst the many strong males in the piece. 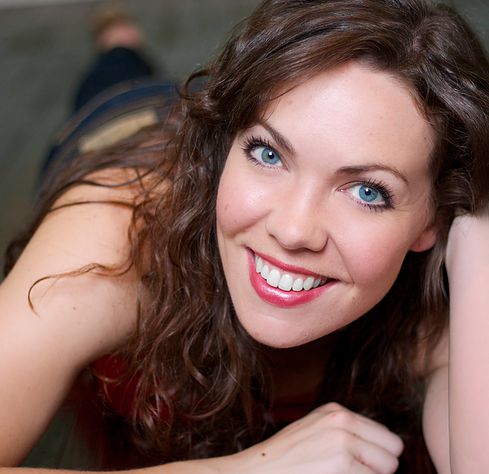 Eger: Which task is more demanding—acting or directing—and why, especially now that you are the mother of little Chloe?

Eisenhower: Directing is more all-consuming, but for a more concentrated period of time. And a lot of the prep work I am able to do after hours, while Chloe is asleep. I also like being able to be home to put Chloe to bed—another perk of directing and not performing. I LOVE acting, but it isn’t as toddler-friendly.

Eger: Looking back at the entire experience of developing concepts on how best to direct this historical musical, your work with the artistic team, and the actors, what would you say were the most important things that you have learned about yourself as a director and as an American?

Eisenhower: One thing that is remarkable about this piece is that it is about great but flawed Americans. There isn’t one character without some fault, some unappealing characteristic. Yet, they were all about to work with each other, to compromise, and to bring a nation together. Adams, for example, is “obnoxious,” Franklin is a bit of a windbag, Jefferson is a hypocrite, Wilson is a coward, etc. These qualities, however, did not stop them from working together. The spirit of compromise exhibited by the delegates during the editing of the Declaration of Independence is a great example of a functioning democracy and I think modern politics could use a bit of that spirit.

In that same spirit, I was able to let go of my pursuit of perfection on this project, which is something that sometimes plagues me as an artist. I just create, get messy, and discover 1776 with this wonderful cast and creative team. The result was, like America, not some pristine and perfect thing, but a piece with a lot of heart that just works. It was freeing to work in this way.

Eisenhower: This is such a great group of people telling an important story. I hope people will come out to Media to see it before it ends its run. And thank you, Henrik, for taking the time to ask these questions.

Running Time: Two hours and 40 minutes, including an intermission.

2 Replies to “Working with the First National Congress in 1776: Interview with director-choreographer Jennie Eisenhower, part 2”