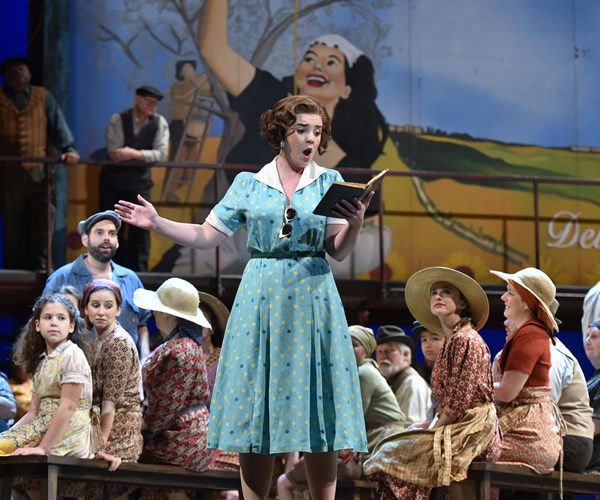 Director Stephen Lawless and a uniformly wonderful cast, led by a spiritedly comic Dimitri Pittas, provide bright, sunshiny fun in this lively, fast-moving, exuberant staging of Gaetano Donizetti’s romantic comedy for Opera Philadelphia. Set in a busy vineyard that could as easily be in California as in Italy—an alphabet lesson defines place—THE ELIXIR OF LOVE puts its characters through everyday paces that set up a simple story that sustains itself by being sprightly amusing and giving Pittas a number of ways to entertain.

THE ELIXIR OF LOVE is as straightforward as opera gets. A young mechanic, Nemorino (Dimitri Pittas), is in love with a village teacher, Adina (Sarah Shafer), but stands little chance to win her because he is a simple laborer with ordinary looks and cannot compete with the handsomer, better-paid soldiers garrisoned in the town, particularly the unit sergeant, Belcore (Craig Verm). Despite the unlikelihood of Adina agreeing to date him, Nemorino tells her of his attraction several times every day. Adina not only rebuffs him, laughing away his overtures and telling him to stop frustrating himself with his suit, but makes fun of him behind his back as well as to his face. She tells her friend, Giannetta (Katrina Thurman), how entertained she is by his continued pronouncements of love and her dismissal of them. Adina says she is not ready to marry anyone and prefers to be independent, but she agrees to wed Belcore the day of his proposal, as he has orders to leave Adina’s village the next morning. Adina doesn’t love or care for Belcore; she consents to marry him to further aggrieve Nemorino  All kinds of plotting ensue, as jealousy, disappointment, desperation, and strategic maneuvering come to the fore.

Librettist Felice Romani may not have developed a complicated story, but he peppers its smoothness with enough clever obstacles to keep the characters hopping, and Lawless adds to the carnival by shrewd use of a bucket, a billboard, a blackboard, a priest’s Vespa, and Nemorino’s classic car. Hijinks keeps Lawless’s ELIXER funny, but splendor comes from the singing and acting in the production.

Pittas, Verm, and Keith Burdette as an hilarious mountebank named Dulcamara, are as agile as they are in command of Romani’s words and Donizetti’s music. Pittas is especially spry, whether he’s playing a cat-and-mouse game with Verm around his car, bouncing a tire on the ground and catching it, or going at a run to various positions where he can spy on Adina. He finds all the “funny” in Nemorino, even when he’s achingly complaining about Adina’s disdain or getting drunk on wine Dulcamara sold him as an “elixer of love” that will make not only Adina, but all women, madly in love with him by the day after its consumption. He establishes his character immediately, and his arias about unrequited love and vocal exchanges with Adina, Dulcamara, and Belcore are robust and beartfelt while being squarely within Nemorino’s character.

Pittas seemed distant and out of place as last year’s Don Carlo. In ELIXER, he’s the master of the revels and so adeptly amusing in that role. He can make you nod in sympathy when he’s pathetic and celebrate with him as he comes up with ways to foil Belcore and woo Adina.

He is well matched by Burdette’s constantly wary Dulcamara, who is so aware of his swindling ways, he raises his hands in submission and waits to be arrested every time someone, usually Nemorino, calls his name from behind. Burdette has a marvelous time with Dulcamara’s shameless villainy and makes a particular delight on the song in which Dulcamara tells all of the uses of his elixir, everything from stripping paint to healing boils.

If Pittas is always in a love-crazed dither, and Burdette is finding new ways to gull his customers, Verm is entertaining with Belcore’s overweening pomposity. Though a sergeant, he is the highest ranked soldier in the village and he struts his command as if he was a peacock, full plumage exposed. Verm’s Belcore is as filled with self-love and self-confidence as Pittas’s Nemorino is riddled with self-consciousness and self-doubt. The three men make Lawless’s production glow with human comedy.

They find a good partner in Sarah Shafer, who has displayed her talent in featured roles and aces her first opportunity in a lead. Shafer exudes authority as she teaches her pupils at the vineyard, merriment in flirting with Belcore when the soldiers make their initial entrance, and kicky satisfaction in bedeviling Nemorino’s advances (even at instances when she kindly and sincerely tells him to stop wasting his affection on her). Shafer sings beautifully and expressively, though sometimes at a too-low volume. On several occasions, she could not be heard, mid-parquet, over Corrado Rovaris’s musicians.

Various things go wrong with everyone’s plans, but since ELIXER is a comedy, much goes right in the most unexpected of ways, especially when a circumstance beyond Dulcamara’s purloined wine conspires to make Nemorino desired by many women at once. Lawless fills his production with cunning touches, such as the way he has Adina and Giannetta recline alluringly and cross their legs as they loll about as Belcore and his troops make their entrance. He also makes good use of the bounce and fogged windows of Nemorino’s precious car and of a blackboard on which an extra fancifully writes a wedding bill of fare with an abundance of chicken in it.

Katrina Thurman joins her castmates in giving a large, vibrant performance that still defines Giannetta’s character. Corrado Rovaris’s orchestra maintains the bright tone Lawless emphasizes on stage. Ashley Martin-Davis’s set, dominated by a changing billboard, is colorful and purposeful. His costumes are right for the period, post-World War II, and add to the brightness and wit of the production. His workman’s coveralls for Nemorino and tight suit that screams ‘charlatan” for Dulcamara are especially good. Pat Collins’s lighting keeps most scenes sun-drenched and festive. Read more on Neals Paper >>>