The performers—Merri Rashoyan, Nia Benjamin, and Ainyé AnnaDora—are all women of color, which is refreshing in the “experimental” “grassroots” Philly theater scene, which remains imbalanced towards white performers, playwrights, directors, and ultimately, stories. Krause deliberately takes a historical stand outside that norm in her director’s note, talking about “the translators that are attracted to Beowulf, all outsiders—Scotsmen, Irishmen, American women, complicated souls,” and saying that “I asked the performers to write, so that this multiplicity of voices could be entirely genuine to us.”

After a haunting song and some backstory, Rashoyan splits the audience into two groups, each of which follows one of the other two performers into the woods. I set off behind Benjamin, a fierce-looking young woman with thick dreadlocks and an imperious gaze. She leads us down woodsy paths and begins to tell Beowulf’s story.

This play’s Beowulf is personal, conflicted, full of stories of her mother and philosophical contemplations about the significance of murder. Benjamin’s task will be to lead us on a walking tour of Mount Moriah for roughly the first 30 minutes of the show (she’s our sole performer outside of a few staged encounters with Rashoyan) and convey this multifaceted version of the legendary monster-slayer. 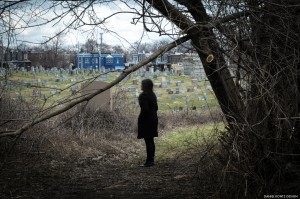 Benjamin is energetic, with flashing eyes and a clear love of the poetry of this text. She is able to pick up our attention when she turns to face us, and is unafraid of coming close and holding uncomfortable eye contact. She has presence even in the massive, beautiful, and distracting cemetery. But her intensity and sincerity are quickly foiled by the stark, and starkly unsolved logistical challenges of this piece: it is a complex poem told in many voices, it is an epic tale (something alien and difficult to most performers these days, particularly millennials), and the production team has decided to have the performer walking away from us, our eyes on her back, for roughly half of the play.

Had the production team decided to do half as much walking, Benjamin (and presumably, Ainyé AnnaDora, who led the other half of the audience) could have spent more time with us, exploring her relationship with the text.

Or, conversely, the walking itself might have been mined for meaning. There is a marked lack of specificity in movement and delivery of text in all of the performers—a marked lack of direction. How does Beowulf walk? Like a young woman from Philadelphia. Does Beowulf sometimes walk beside us, sometimes ahead, sometimes behind? No. Beowulf almost always walks ahead, her back to us, at the same pace, throwing glances over her shoulder or turning to face us, predictably, in the middle of each speech, then ending each speech by walking away again as if this settles matters. Like lighting changes, this pace of stopping and starting could be varying and meaningful, but it is nearly uniform, and elicits a routine delivery from Benjamin.

BEOWULF/GRENDEL teaches as much about the distinct challenges of a walking play as it does about Beowulf’s story. Unlike the company’s Fringe show last year, Damned Dirty Apes, which led audiences through FDR Park in South Philadelphia, this is an intimate story with a personal text and very few performers. Apes was trying to entertain, and it adapted that goal to its venue with spectacle, carefully scaled humor (broad, deliberately camp), and two times as many performers.

I would watch Krause’s BEOWULF/GRENDEL seven times before ever sitting down in front of the 2007 action movie version. Though it is difficult to follow in this production, it seems that the team has produced a deeply personal text which might be interesting. (They combined a new translation of the Beowulf poem with compositions by the performers.) It might find a good home in a more personal production, but here, its significance is subsumed by the setting.
[Mount Moriah Cemetery, 62nd and Kingsessing Avenue] April 13-24, 2016; therenegadecompany.ticketleap.com.

One Reply to “BEOWULF/GRENDEL (Renegade): The difficulty of the walking play”