Sasha Frolov lays on the FringeArts stage in a brown jeans and an orange T-shirt. Gabrielle Revlock approaches him in a long-sleeved purple shirt and blue shorts; lays down beside him; spoons him; holds his hand; drifts away from him and rests a little more than two arms-lengths away. They stretch to touch once more, their hands just out of reach, quoting Michelangelo’s ceiling. Lights fade, only a spotlight on their outstretched hands remains. And black.

This prelude to Revlock and Frolov’s new hourlong piece, SHOW NO SHOW, captures the exploration to come. As for God and man, they seem to say, so for woman and man, so for human and human: probe, misunderstand, control, worship, leave.

The work began as a collaboration at Omi International Art Center in  August 2014. The pair were attracted to each other’s sense of humor, and this runs through SHOW NO SHOW. It’s a smart, funny dance piece tracking a relationship, or relationships, through a series of well-expressed interactions.

After the prelude, lights rise as Revlock shows Frolov around the stage, as if welcoming him to a new workplace. She apologizes and he blusters, their moves an interplay of exaggerated awkwardness.

This inability to communicate, pervades the series of interactions. Much of the work is performed to no soundtrack, but the awkwardness continues when music appears. The pair’s dance to a ragtime piano number is a treat of synchronized asynchronicity—partners misunderstanding each other’s moves.

At times, the sparsely used soundtrack itself expresses the trouble in communication: Morris Albert’s “Feelings” plays as if on a skipping CD; another number repeats as if on a skipping record. Only Revlock’s solo to Sigur Ros’s disharmonious “Fjogur Piano” allows for a truly liberated choreography. Alone, Revlock expresses freedom, her hands a fluttering bird. When Frolov attempts to join her, she picks up a megaphone and says : “I’m in charge here.” 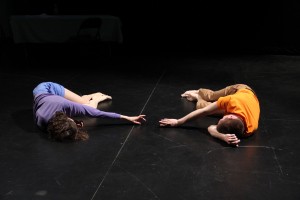 Power struggles dominate many of the interactions, whether touching (slapping?) to get to know each other, arm wrestling, poorly executed pattycake, or an unsteady piggyback ride. Generally, Revlock comes out on top, sometimes literally, sometimes symbolically.

In another quotation of religious art, she poses as a Christ upon the cross with Frolov supplicant below. Her worshipped martyrdom transforms into ennui with the fold of her arms. She leaves her pedestal and walks away.

SHOW NO SHOW’s most dialog-heavy scene plays with these themes of misunderstanding and transience: Revlock balances on a crouching Frolov, getting him to translate phrases from English to Russian: “What is good… What is bad… What should we live for?… What should we die for? What should we hate? Who am I? What should you love?”

We seek meaning, in life and in our relationships, but the answers to our existential questions aren’t satisfactory. “There isn’t an answer to these questions,” Revlock tells us. “Except one… you will die and all will end.”