When we last caught up with Bastion Carboni he was (fairly) newly arrived in Philadelphia from Austin, Texas, and about to launch his first theatrical production, Sometimes Callie and Jonas Die, at the 2015 Fringe Festival. Bastion’s fully settled in Philadelphia now and his alter-ego Pilar Salt has been taking the town’s burlesque/drag scene by storm with a politicized take on the genre. Pilar/Bastion is teaming up with sex educator/ burlesque performer HoneyTree Evil Eye (Timaree Schmit) to bring “a new kind of showcase to the Gayborhood, one that gives artists an opportunity to make the sort of challenging, toothsome work for which they don’t otherwise have a platform.”

AGITATED, which launches March 31, 2016, at Tabu Lounge (200 S. 12th Street) will feature such acts as burlesquers tackling climate change, drag queens confronting bad feminists, performance artists who take issue with frats, and a singer-songerwriter who has particular feelings about banana republics. Bastion talks to Phindie about the series.

Phindie: Tell me a little about AGITATED.

Bastion Carboni: On its face AGITATED is an evening of interdisciplinary, unabashedly political performance. HoneyTree Evil Eye (sex educator/ burlesquer Timaree Schmit) and I were in a dark bar drinking rum and talking about how we had a suspicion that there were drag/ burlesque performers in town who would produce challenging, meaningful poltical material if they were given an open, supportive platform to do so (that sort of stuff is not often fostered outside of Bee Reed’s Devil Drag). We put out a call for proposals, sifted through them, commissioned a few artists we love, and here we are. There’s gonna be some hilarious, weird, dark, sad, angry, and idealistic craziness happening. We are so stoked.

Phindie: Last time we talked you were a fairly recent transplant to Philadelphia. What are your perceptions of Philadelphia, its theater, and its drag/burlesque scene having spent a little more time here?

BC: The scenes are all so vibrant! It’s so refreshing to be in a city where I can see an art entertainment something-or-other every night of the week. And Fringe was really edifying because we had all these randos coming out of the woodwork to check out our piece based on word-of-mouth and the poster or description. I love the adventurousness of Philly audiences and the “fuck it, let’s try it out” sensibility. It’s great.

Phindie: Where do drag/burlesque and theater intersect and diverge?

BC: With all the forms there is an unfortunate tendency to miscalculate and underestimate an audience’s capacities and to condescend to them. In drag specifically there is this “will the drunk, dumb people like it” litmus test that stymies a lot of people and results in a lot of weak-sauce, pandering material. People associate “serious material” with someone cutting themselves and crying and writing “fat” on their midsections to “Beautiful” by Christina Aguilara. There’s an undercurrent of gun-jumping defeatism, which is weird because the art form is so historically defiant.

The fourth wall rarely exists in drag/burlesque. In fact, it is largely seen as a bad or prohibitive thing. I have often been told to stop treating drag like theater, which means make eye contact and take money. The audience relationship works very differently, and interaction is considered of paramount importance.

In theater there is a concrete culture of criticism and standard-bearing that doesn’t exist in burlesque and drag. Critical thought is often dismissed as being “shade” or jealousy. Theater people are bred with a willingness to engage in critique. But the flip side of all that is the really beautiful thing about drag/burlesque: you can just come out of nowhere from nothing and do it and keep doing it. No schools, no auditions. You watch a few YouTube tutorials, smack make-up on, talk to some people at a show, and get on a line-up. If the audience digs you, you can snatch more gigs. Hopefully someone takes you under their wing as a “drag mom” and teaches you how to look less terrible (which is drag’s version of critical community). All you need is a hot glue gun and a dream, as the saying goes.

Phindie: I attended some of last year’s Mr. Everything and Burlesque Battle Royale at Tabu and recognized a few performers from Philly stages. Would you like to see more crossover between the stages?

BC: Hell yes! We’re at this point artistically where cross-pollination and hybridization is not only highly desirable but also crucial to the continued survival of performance art forms. Every month we’re featuring at least one (hopefully more) non-drag, non-burlesque act, mostly Pig Iron MFA candidates. 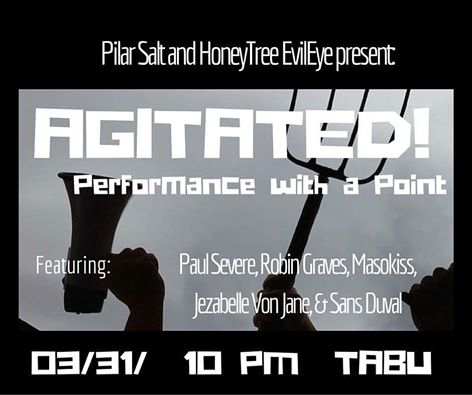 Phindie: What else do you hope to achieve with AGITATED?

BC: We want every conceivable type of performance in this show. I mean, this go-round we have a burlesquer using pointe dancing and bondage in a piece about climate change, a girl drag queen (hyperqueen) doing a monologue as a man about shitty male feminists, and a piece my performance husband Paul Severe refers to as “The Pedophile Tango”. My main hope is to offer a place for performers to rip scabs off, to question and implore and converse with the audience. I really want people to challenge their own notions of what their art form can do. During the Ms. Everything competition at Tabu last year I was super heartened and bolstered to find that there was a ready, eager audience for the kind of overtly sociopolitical material I’m interested in making and encouraging. We’re ready to blast the roof off Tabu.

Phindie: Audiences and critics loved your 2015 Fringe piece, do you have anything planned for 2016?

BC: So my 2016 Fringe piece is AN OBVIOUSLY FOGGOT, a site-specific collision of found/ new text, reconstituted pop music, and dance pieces about internalized homophobia in gay bars (basically). We’re producing it at iCandy and it’s actually the entire reason I got into drag in the first place. A few years ago I wanted to find a bar to produce it in and had the notion that a manager would be more likely to give me the space if I proved myself as a performer. Thus wigs.

Phindie: Ha, nice! We look forward to it, thanks Bastion!

One Reply to “Agitate This! Bastion Carboni (aka Pilar Salt) on a new showcase melding theater and burlesque”