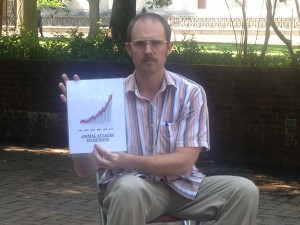 As the established Philadelphia companies enter their long off-season, the SoLow Festival is providing a welcome dose of idiosyncratic theater at some unusual venues around town. THE VIOLENCE OF THE LAMBS (OR THE ANIMAL VS. HUMAN WAR) is characteristic of the festival. Chris Davis’s 1 YEAR AND A DAY was a highlight of last year’s Fringe and he has been impressing audiences for the last couple years with the anthropomorphic DRUNK LION. Performed outdoors in Independence National Historical Park, his new 30-minute play (a collaboration with Mary McCool and director Mary Tuomanen) is another endearing and amusing work by a fresh voice in local theater.

For VIOLENCE, Davis adopts the character of Marcus Livingston, a professor of “comparative zoology” and a fan of “Croc Hunter” Steve Irwin (“not just a TV friend, but a real friend, on TV”). Livingston has gathered his audience for a presentation on the impending war between humans and animals, complete with illustrative graphs, photos, and a lamb-led slaughter. Funny stuff. June 21-29, 2013; solowfestival.blogspot.com, facebook.com/events/193584480796215.

4 Replies to “THE VIOLENCE OF THE LAMBS (OR THE ANIMAL VS. HUMAN WAR) (Chris Davis): 60-second review”