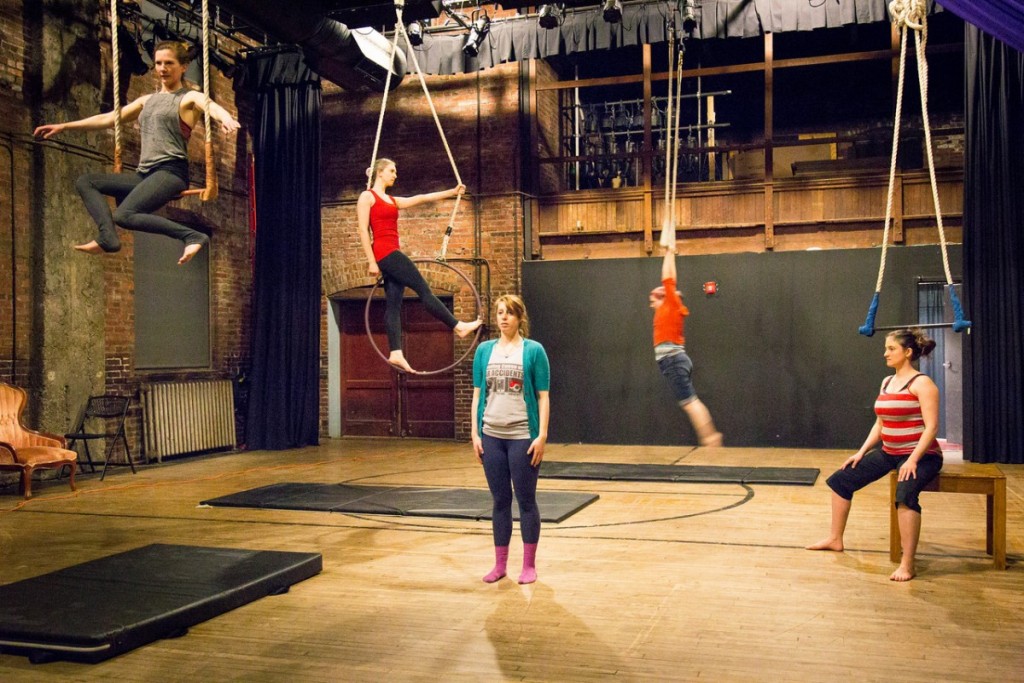 Nostalgia is big business. It sells ad space during blocks of reruns on late-night television. It pushes drinks on club theme nights where people only want to dance to The Cure or Joy Division or Bauhaus. It’s probably mentioned multiple times in half the job descriptions at Buzzfeed. These days it’s easy to get cynical about its all-pervasive influence. It’s a tool that’s easily exploited, turning it from something pleasurable and personal to a hollow cash in on our shared recollections. But then there are those much welcome instances that remind you looking back can be a means of celebration, of reaffirming identity, of sharing something that remains relevant with those who missed it the first time around. Tangle Movement Arts, Philadelphia’s all-female circus arts theater company, is just about due for some of this nostalgia and this weekend they will have it. Their latest show RetroAct, a circus-theater remix of the most exciting moments from their oeuvre of aerial dance theater, comes to Christ Church Neighborhood House March 17-19, 2016, and should not be missed.

Since 2011 Tangle and its ten woman company of artists and collaborators has brought multidisciplinary, multidimensional storytelling with an emphasis on queer and female experience to spaces high above any other stage in the city. Mixing traditional circus arts like trapeze and acrobatics with elements of dance, theater, and live music, Tangle tells their stories in a manner few could ever dream of imitating. “We believe that circus arts can be a powerful tool for challenging assumptions about what bodies should look like and what they can do – from floating upside-down, to subverting gender roles,” poet and performer Lauren Rile Smith, Tangle’s founder, recently told FringeArts. “Circus arts is a context in which women build muscle, men move gracefully, partners lift each other into the air, and everybody can defy gravity.”

Taking its name from the possibilities that arise when things get complicated, Tangle has produced ten full length shows (five of which enjoyed successful runs as part of the last five Fringe Festivals) and numerous pop-up projects along the way, each highlighting women’s strength and queer stories while rendering complex, oft-unspoken ideas into remarkable physical feats. The Girl’s Guide to Neighborly Conduct, which premiered at the 2015 Fringe Festival, followed six longtime housemates whose lives are quietly upturned following the arrival of a new neighbor. You Don’t Say took a dinner party setting and subverted the expected smatterings of small talk and flirtation by translating them into acrobatic explorations. Timelines looked to the past, present, and future to examine notions of time and the female body through a series of pieces that included a daydreaming 1950s office secretary, vaudevillians, and the evolution of life on earth.

RetroAct stands as something of a victory lap for this accomplished company, a look back at some of the work that has made them a Philadelphia favorite in such a short time. It serves as a great introduction to what Tangle Movement Arts does, a compilation of some of their favorite moments from ten shows of aerial storytelling: “In RetroAct you’ll see a dreamer wake up on aerial silks and get dressed 20 feet in the air; a piece of hot gossip that gets traded between five people on trapeze; a campy love letter to drag traditions and feminist icons; and a fight turned flirtation that sends two women tumbling across the floor and up to the ceilings.” Featuring collaborations with two longtime Tangle guest artists, internationally performing trapeze artist Megan Gendell and Nina Giacobbe, it’s a show as suited for newcomers as it is for fans who feel that pang of nostalgia when they recall Tangle’s gravity and genre-defying spectacles of years past. If you’re either, even if you’re neither, you would be wise to grab a ticket. (Tickets: $15-20.)

If you’d like to learn more about Tangle Movement Arts, Lauren Rile Smith and her company were just featured on Imagine Otherwise, a podcast about bridging art and activism. Listen and download here.