Caitlin Weigel is one half of sketch comedy writing team House of Solitude. She and writing partner Daniel Corkery usually write traditional sketch comedy shows, comprised of 6-8 original shorts. Their new work is an extended sketch… one might even call it a play.

An homage to Tennessee Williams, A GALAXY UNCHERISHED features all the tropes of a Southern drama set against the backdrop of a moon expedition. “We’re hoping to appeal to the sweet center spot in a Venn diagram of comedy fans and Tennessee Williams lovers,” says Weigel “People can expect a lot of drama, a lot of moon metaphors, and probably some really bad Southern accents.” Weigel talks to Phindie about the piece and about writing a play she’s not quite comfortable calling a play. 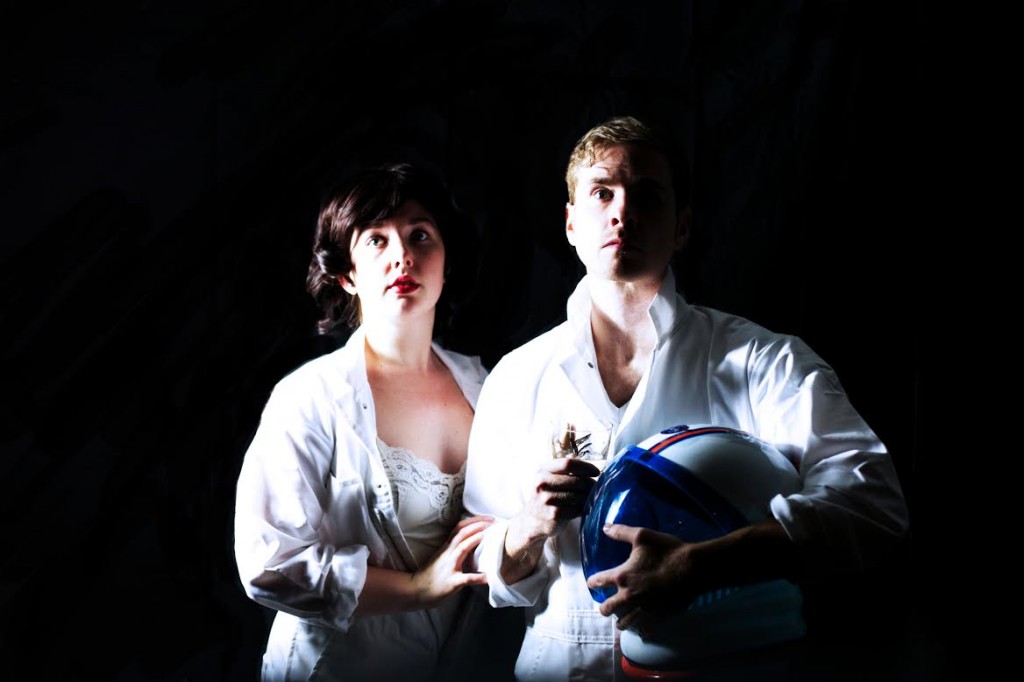 Phindie: So… Tennessee Williams in space? How did that idea come about?

Caitlin Weigel: Dan and I both gravitate towards character work—specifically characters that take themselves too seriously. Tennessee Williams plays are life’n’death drama and everyone has something earth shattering going on; space is a high stakes place (or so I’ve been lead to believe, I have never been personally) so it’s a perfect mashup for us. When we started writing together, Dan pitched this as a random idea as an easy green screen web video. He did it in a total “pick one thing from this jar and another from that jar” kind of way but I loved it and we ended up actually sussing it out and making it into a full live show.

Phindie: What does it draw from Williams?

CS: Character tropes for sure—the gentleman caller, the fading belle, the frail sibling, the washed up hero—and beyond that, we did our research and picked all the parts we liked about his world. There are always a million secrets; everyone has a crazy history that they reference vaguely until they just pour it all out at the end. There’s a lot of yelling, talking about tradition, some sort of effed up love element. Everyone is also playing every single character in the show as if they’re the protagonist so it’s a lot of people making insane declarations and finding their light.

Phindie: Tell me a little about the writing process, how does your collaboration work?

CS: Dan and I are big Google doc dorks—we built characters we liked first, then outlined the overall story line for the larger show. Then for each individual scene, we treated it like a sketch: we came up with a premise that worked for those characters while still moving the plot forward and wrote them out. I would write something and send it to Dan and he would punch it up or vice versa. After all the smaller pieces were in place we smoothed the transitions out, assembled all our local sketch heroes, filled them with beer and cookies and made them do a reading. From their feedback, we adjusted and revised until we got to a place that we liked.

Phindie: How do you know when something’s funny?

CS: I have human measuring sticks—people whose sense of humor I trust, so if I’m not sure if something is funny or not, I can watch them read it like a real Grade A creep and determine if it’s actually hitting. Dan is a good sounding board. Some things are always funny to me—angels, the moon, that one Snickers Halloween commercial with the kids on each other’s shoulders.

Phindie: You and Daniel approach theater from a comedy and sketch comedy background?

CS: This is correct! Dan and I met doing improv comedy and started writing together last year. We both did sketch in college and a little post-college here and there.

Phindie: How do you think that informs your work in a way that’s distinct to someone from a purer playwrighting background?

CS: I think we don’t have any real ideas about what a play has to be so we’re a lot more free to do whatever we want in our writing—there’s not a miniature man in a beret mentally tsk-tsking me for writing about button circumference or breaking the fourth wall. It’s such a weird thing—I think Dan and I are very hesitant to call this a play (though we aren’t sure what it is really and to a stranger, it might look like a play) even to each other because it feels like it comes with this huge weight attached to it—like then we need to have a theme and a tone and tie up loose ends and make it all a metaphor. It feels like a responsibility. Whereas if we keep telling each other this was just a 25-page sketch, we feel like we could do anything we wanted because that’s a world we’re well-versed in.

Phindie: Do you think there’s a disconnect and distrust between sketch comedy and “straight” theater people?

CS: I don’t know much about the theater world or if there is a disconnect. People who put themselves out there and allow themselves to be vulnerable or call themselves artists and don’t feel like they have to apologize—we respect that and strive for it in comedy.

Phindie: What do you like about writing a full-length as opposed to a short sketch?

CS: Dan and I were already interested in exploring ways to tie a whole universe together in our last few House of Solitude shows—we like the idea of finding connections and making callbacks in a sketch show. This show felt like we just let ourselves do that—we got to flesh out a whole little weird pocket of space and see how these bizarre characters function and respond in multiple situations. We also got to bring in the story element—it’s more than just premise, there’s an arc that carries the whole thing. Seeing double digit page numbers is also bad-ass. Like a goddamn leather jacket driving a motorcycle through a fire jacuzzi. But safer!