EgoPo’s show closes at Plays & Players in Philadelphia tonight. I finally got to see it at the end of the run. The finale of their American Vaudeville Festival, UNCLE TOM’S CABIN: AN UNFORTUNATE HISTORY is not actually vaudeville. Adapters Lane Savadove and Glenn Odom have taken ideas and language directly from the vast panorama of Harriet Beecher Stowe’s novel to produce a theatrical exhibition that serves as a corrective to early versions of Uncle Tom’s Cabin, which included Minstrel shows and vaudeville. 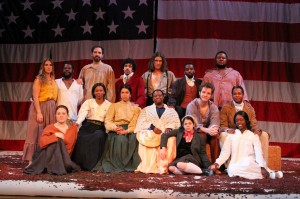 This production attempts to illuminate the characters on both sides of the antebellum racial divide and to reclaim the authentic image of Tom, which time has hijacked. Stowe’s noble Uncle Tom, misrepresented and maligned for years as the embodiment of a black-on-black insult, just isn’t that simple. Neither a firebrand nor an ass kisser, he lives and dies holding his own as a principled man. Activists may have wanted his character to be more than the non-violent Christian that he was. But the condemnation in the moniker, “Uncle Tom,” is revealed to be misplaced.

Ed Swidey (Uncle Tom) and all of the actors’ heartfelt attention to their difficult parts and their ensemble work pays off in audience empathy. Remarkable and constant scene shifts work like a charm, and music and sound integrate with the acting and scenic concept to create an attractive pageant.

The special twist of race-reversed casting—which has attracted attention to EgoPo’s production—creates complexities that are both enlightening and, well, not so enlightening. There are inconsistencies. A case in point: Steve Wright does a straight and earnest interpretation of Augustine St. Clair, a well intentioned white slave owner who lacks the courage of his convictions. However, Tiffany Bacon as his unsympathetic and spoiled wife, plays her role for laughs—a sitcom African American mama with ‘tude. And while this odd portrayal of a 19th century Caucasian woman certainly confuses the race-switch issue, it also generates all the laughs in this serious show. Each flounce in her outsize interpretation produces appreciative chuckles from the audience.

The key scene where Simon Legree chases escaping slaves, Eliza and son, across the frozen Ohio River is done in slo-mo (which had been utilized early on in a lengthy pre-show pantomime). It works here as well, but bales of hay conscripted as ice floes on the Ohio cheat us of the prominence that simple ice and water images could have given this critical dramatic scene. The memorable “Run Eliza run” chase in “The Small House of Uncle Thomas,” the play-within-a-play in The King and I, comes to mind. That scene left a lasting imprint.

A niggling, but disconcerting detail is the pronunciation of pivotal character Little Eva’s name as “Ava.” Little Eva (pronounced Eva) has long been an established piece of Americana.

This worthwhile theatrical undertaking is bolder in concept than in execution, partly due to the fact that it simply gets bogged down by more content than can reasonably be fit in. Lifting out 45 minutes of pertinent yet unnecessary digressions could have lightened its burden. A show that’s just too long, even a show with a commendable aim, taxes audience endurance. Finally a recited ending statement is redundant after the long show has already said what it has to say.

One Reply to “Afterthoughts on UNCLE TOM’S CABIN: AN UNFORTUNATE HISTORY (EgoPo)”