New York Times reporter Kim Barker is part of the genius behind this year’s Whiskey Tango Foxtrot, a war comedy starring Philadelphia native comedienne Tina Fey. The film, based on Barker’s 2011 memoir The Taliban Shuffle: Strange Days in Afghanistan and Pakistan—which is based on her experiences as a foreign correspondent for the Chicago Tribune in those countries—is the first of its kind, portraying the eccentricities of war through the eyes of a journalist with persuasive wit and a uniquely unforgettable sense of humor.

Phindie: Seeing a Hollywood actress portray you in a film must be pretty surreal. What was your initial reaction to Tina Fey?

Kim Barker: There wasn’t really any choice BUT Tina Fey. Michiko Kakutani, the chief book critic at The New York Times, wrote a glowing review of the book in March 2011 where she said I had created a Tina Fey character in myself in the book. So, casting by Michiko. Because Tina Fey is a total egomaniac (that’s actually her joke, which I just stole), she read the book. Within two weeks of that review, Tina had pushed Paramount and Lorne Michaels and [screen]writer Robert Carlock to sign on to option the book. My initial reaction? Um, I get to meet Tina Fey!

Phindie: Did you have any involvement in the process of adapting your memoir into a screenplay?

Kim Barker: I met frequently with Robert Carlock, who’s worked with Tina for years. He also met with friends of mine who had been in Afghanistan, and with other people who had worked in Afghanistan. In a sense, he was reporting out the story that he ended up telling, which, while based on my book, has its share of Hollywood-type baubles: More explosions, more cocaine, and a way more heroic version of Kim.

Phindie: Why the name change in the film from Barker to Baker?

Kim Barker: According to Robert Carlock, budget cuts. They just couldn’t afford that extra ‘r.’ But I actually think it’s because they fictionalized the story. All the names in the movie are different than in the book. Because Robert wanted to acknowledge the fact that I wrote the book, he pretty much took the most common typo of my name and made it my name in the movie. Thanks Robert–I guess I should just get it over with and change my name to Baker now.

Phindie: You were on set during filming. What was a typical day like?

Kim Barker: I was only on set for two days, and everyone was really nice and supportive and thankful–saying things like, without me, there would be no movie. So that was a bit gratifying and overwhelming. But the actual filming itself was kind of boring. Journalists typically have a short attention span and are always trying to learn new information. Repetition is challenging for us. Making a movie is all about repetition, and shooting the same scenes, over and over. I left early on the second day, even though Tina had ordered a grilled-cheese truck. And I love cheese.

Phindie: One thing that distinguishes Whiskey 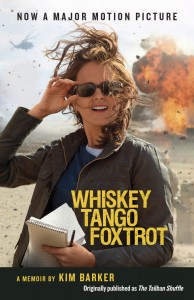 Tango Foxtrot from other more dramatic war epics is its comedic tone. Did that sense of humor come naturally to you while writing The Taliban Shuffle: Strange Days in Afghanistan and Pakistan?

Kim Barker: I grew up in a family where dark comedy was pretty much a way of life. My parents are funny, and a bit absurd, and I think I absorbed that from the time I could speak. Kurt Vonnegut was one of the first authors I read when I was young, and then I moved on to Joseph Heller. M*A*S*H was almost required viewing for our family. So the idea of combining horrible tragedy with dark comedy felt very natural. Especially given everything we saw over there [in Afghanistan]—an absurdist frame was the only one that made sense.

It’s interesting to me that when I told people from over there I was writing a dark comedy, they totally got it. But some folks in the U.S. were horrified—you know, the ones who have never been in a conflict zone, the ones who don’t understand that dark comedy is often the only thing that helps people cope with tragedy. The book has its dark moments—it is, after all, war. And the Pakistan section in particular goes to some pretty grim, unfunny places. But the film as well has its dark side.

Phindie: Your experience offers a similar emphasis on the “addiction to adrenaline” that Katherine Bigelow’s The Hurt Locker narrates, something that still seems unreal to many people who might think it inhumane that someone could grow an attraction, let alone an addiction, to such a lifestyle.

Kim Barker: Here’s the deal—as reporters, I think being in a huge story is really the place we want to live. This was a completely different culture for me, and one of the most important stories in the world, and we were watching history unfold and getting the privilege of writing about it. It’s not inhumane. I’d argue that the book and the movie have a very humane (and human) touch. Also, I wasn’t on the front lines that often. I didn’t focus on the bang-bang, and I didn’t do body-count stories. Instead of focusing my coverage on how people died at war, I tried to write stories about how people lived through decades of war.

That was the addiction for me—feeling like I was living and breathing an amazing and compelling story 24 hours a day, about the future of Pakistan and Afghanistan. I didn’t fall in love with conflict. I fell in love with story. Afghanistan is a beautiful place. And Afghans are hilarious and hospitable and gracious.

Phindie: Towards the end of the film, one character says to yours, Embrace the suck, and move the fuck forward. The film dwells on your experience in Afghanistan and the “adrenaline addiction” that it stirred in you, but the ending only hints at your struggle to readjust to civilian life. What was that like?

Kim Barker: It sucked. It’s so much harder to come back from a conflict zone than it is to go. It probably took me two years to adjust. In the beginning, I was that super-fun friend who would complain about a drink that cost $15 by saying, “Do you know what $15 could buy in Afghanistan?” I was probably very tedious. I spent a lot of time alone at home. I didn’t necessarily know how to talk to people who weren’t overseas. I didn’t know how to sit with friends and relax. I was still on the edge, always expecting something to happen. But eventually, I adjusted. I think. I’m fine now. Really.

Phindie: At what specific moment during your time in Afghanistan did you have that thought: I’ve gotta write a book about this?

Kim Barker: In 2006 and 2007, I started saying I was going to write a funny book, mostly about the social scene of Kabul, which was always so absurd. That idea later expanded to more of a memoir about my entire time there. I wanted to do it darkly comic, and with a relatively light touch, because I wanted people to read the book. And I wanted people to learn about Afghanistan and Pakistan without even realizing it. Also—I wanted to write about what was happening in journalism at the time, with all the cutbacks, because I believe that what we do matters, and has value. (And, well, because Sam Zell.) By 2008, I had decided I needed to write this book.

Read the book! You can purchase The Taliban Shuffle: Strange Days in Afghanistan and Pakistan here. Whiskey Tango Foxtrot premieres today, March 4th, at a theater near you.