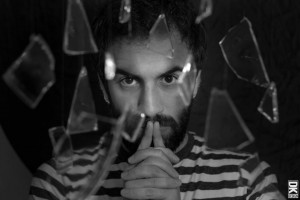 Tennessee Williams’s The Glass Menagerie is described as a “memory play”: its plot an extended flashback, its theatrical pretense laid bare. GLASS: SHATTERED, Michael Durkin’s reimaging of this classic of American theater, plays with the idea of created memory. Watching homemade films of the scenes in the original play, Tom (Eric Scotolati, in a characteristically intense performance) exclaims “I don’t remember any of this.” Memory, like a film, can be edited and manipulated. Tom has crafted a narrative of home life to suit his own purposes. With his mother dying of cancer, he starts to reevaluate these memories.

Although Durkin’s experimental piece relies too heavily on projected film, it uses its source material provocatively and insightfully. There are moments of wonder (Tom crying out to the memory/ghost of his mother), but these don’t congeal into a narrative nearly as satisfying at Williams’s original. June 5 to 22, 2013, therenegadecompany.org.