The title of Eric Pfeffinger’s SOME OTHER KIND OF PERSON, now in production by Interact Theatre Company, refers to a purposefully misquoted line of Aristotle, that if you act virtuously out of self-interest you cannot be called a virtuous person but “some other kind of person.” Pfeffinger’s characters are never given the self-awareness to be anything else, but this entertaining play finds unlikely—but truly funny—comedy in child prostitution, exploitative adoption companies, brutal dictatorships, and other issues that might stir our selfish altruism.

On a business trip to Cambodia, Bill (David Ingram) makes the wrong choice when asked whether he wants “a good time” or “a good time.” Business school-trained madame Kaliyan (Bi Jean Ngo) shows him the “merchandise” at her brothel. 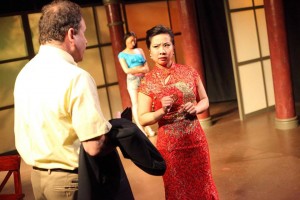 In a sudden out-of-character decision, the unadventurous numbers-man decides to “liberate” one of the girls, buying her freedom and giving her a toothbrush. He leaves her on the streets, wondering why he didn’t get a “thank you.” Meanwhile, back at his hotel, his associate Lakshmi (Nandita Shenoy) is making up hard-luck tales to close an outsourcing deal, while new acquaintance Cara (Brenny Rabine) sits at the hotel bar hoping for a call from a corrupt adoption agency.

This might not sound like the précis for a comedy, but director Paul Meshejian has released hilariously in-tune performances from each cast member. Ngo’s turn as an elegant and savvy businesswoman in a unfortunately lucrative trade is especially controlled; Shenoy’s doe-eyed energy would fit in a SNL skit.

Pfeffinger is attempting incisive satire about Western complacency in an interconnected world, and his comedy provides a valuable entree into hard-to-handle issues. But though good satire does not require nuanced characters, the women in a satire on the sex trade should not be so cartoonishly unaware or—as with young prostitute Angkat (Victoria Chau)—barely a character at all.

This would be unforgivable, except that Pfeffinger is most brutal in his treatment of Bill, who too-obviously sabotages his own do-gooding when it no longer serves his self-interest. There is some fine insight and strong humor in SOME OTHER KIND OF PERSON, but some of the scattershot jokes fall flat and none of them trust the intelligence of the audience, not to mention the oblivious characters. May 31 to June 23, 2013, interacttheatre.org.