Reprinted by kind permission from The Dance Journal 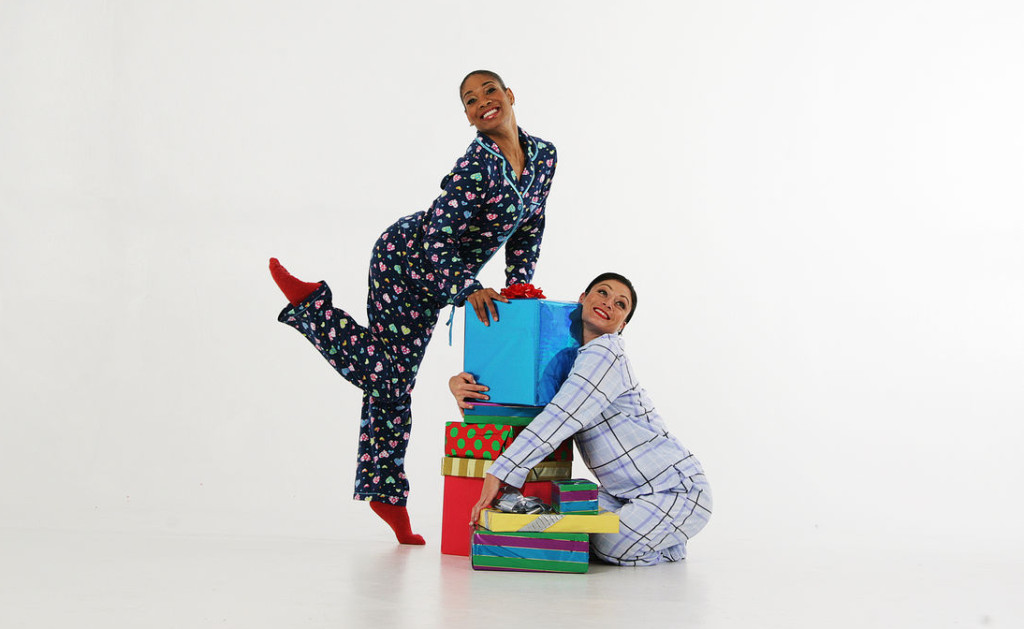 A man on a park bench wearing an oversized coat.

A recording of “White Christmas” filled the auditorium of the Perelman Theatre inside the Kimmel Center.

Five minutes prior, Joan Myers Brown (JMB), founder and artistic director of The Philadelphia Dance Company, greeted the audience and thanked sponsors before explaining the process that led to the premier of the full -length version of X-MAS PHILES.

Knowing he had worked with Paris Opera Ballet, Hubbard Street, Cirque de Soleil, and Bathsheva, I was eager to experience the choreography of award-winning choreographer Danny Ezralow, on the dancers of Philadanco. Slightly thwarted, I saw more pageantry and staging than choreographed dance phrases built to demonstrate the ability of the dancers – at least that’s what I was hoping for.

The curtains rose to reveal a stage of dancers in silhouette. They used their bodies to create shapes before spelling out “X-mas Philes” at the end of the scene, which transitioned to the park bench with the aforementioned melancholy Tony Harris Jr. He moved slowly, as if wallowing in a memory. He began to tap, but not long enough for me to warm up to his rhythm. He had a story, but even in his gloom, he never appeared hopeless.

The progressed into a dream sequence but then dialed down to offer just vignettes; snapshots of dances done to movie scores and known holiday songs. There was no clear narrative and although some vignettes were more successful than others choreographically, the sections were high energy and well danced throughout.

“Blue”, danced by Joe Gonzales was a quiet display of adagio-like suppleness. He moved in waves as he echoed the somber tunes of “Blue Christmas”. An adept dancer, Gonzales committed to the storytelling aspect of his dancing as it called for him to embody a deliberate quality that deemed him somber.

“Silent Night” was a sea of floating fabric entering and leaving in the stage in a tranquil delight of simplicity.

There were dance numbers and then there was “Jingle Bells“; the high – energy step number that had the cast creating counter rhythms with their hands and feet. Dressed in jumpsuits and rain boots adorned with bells on the rims, the dancers used their entire bodies to create complex rhythms. Pulling from elements of hip-hop and tap, stepping was developed by African American fraternities but found its origins in a combination of military exhibition drill and African foot dances such as South African Welly “gumboot” dance. The rhythmic quartet of Adryan Moorefield, O’Shae Sibley, Ivory Leonard, and Will Rehm, performed complex beats at intoxicating speeds and in unison. For me, the best reason to see X-MAS PHILES is Jingle Bells!

I couldn’t help but wonder what the rehearsal process was like for this section; did Ezralow create the phrase and then have the dancers manipulate it? Did he demonstrate the stepping to the dancers? Or did the dancers themselves choreograph the section? If the answer to the latter is true, then credit should be given to the dancers for having helped to create one of the most successful sections of X-MAS PHILES.

Commanding the stage, the dancers mastered every step that was given but their abilities were compromised due to presentational shtick. Philadanco boasts highly trained, versatile dancers who were asked to put on a modern day vaudeville show that lacked the ingenuity it promised.

In a recent interview with JMB, she promised that X-MAS PHILES would be fun….even dope, and I thought it was fun. But fun showed itself as a side-track to the level of dancing the dancers of Philadanco are known for bringing to the stage.

Well trained, diverse, and technical, the dancers did what was asked of them; I only hoped they had been given material that allowed them to demonstrate why they continue to be one of Philadelphia’s best.