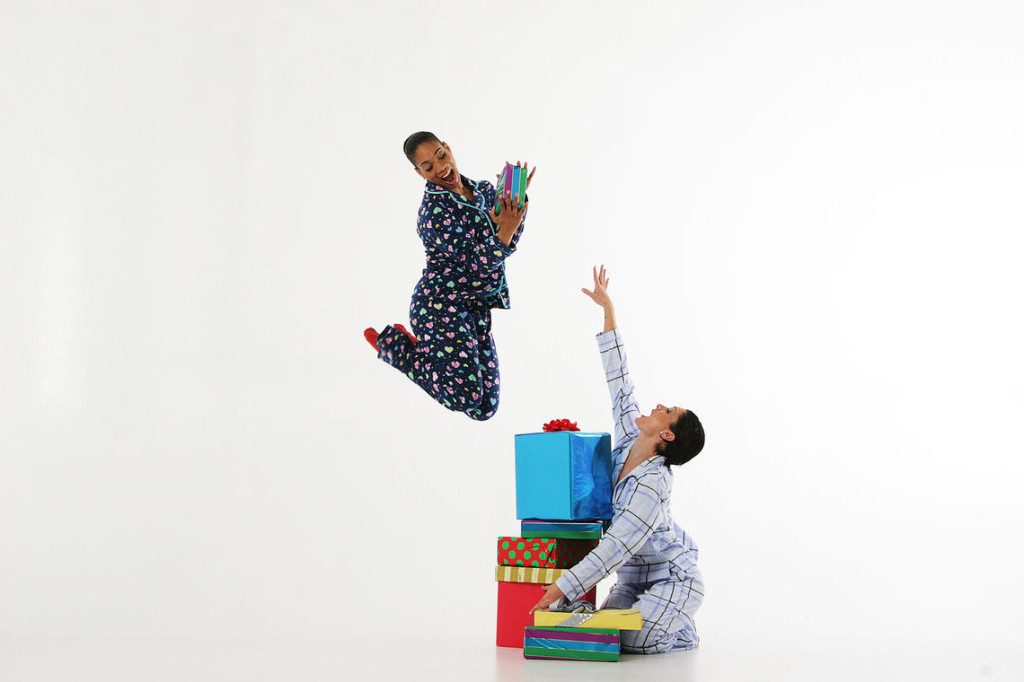 Philadanco’s THE X-MAS PHILES has been a returning hit for the company since its premiere 15 years ago. A dance sampler of holiday vignettes that reflect cultural traditions and meditations, some funny, some poignant, are set to a playlist of seasonal songs. Choreographed by Daniel Ezralow, it was one of the first dance alternatives for Philadelphia audiences who were looking for something other than The Nutcracker and Handel’s Messiah during December.

Five years ago, Ezralow added two new pieces to THE X-MAS PHILES. He is back in Philly this year to further expand the piece and discuss strategies with Philadanco director Joan Myers Brown for the development of its artistic appeal and commercial success.

Ezralow danced for Paul Taylor, Lar Lubovitch, and Pilobolus. and was co-founder of Momix and ISO Dance. Since creating THE X-MAS PHILES, he has become an internationally sought after choreographer with a golden touch.

In addition to having his ‘fluid’ company Ezralow Dance, his choreographic career has been as wide-ranged, choreographing ceremonies for the 2014 Sochi Olympics and his headline-grabbing aerial choreography to music by U2 for the tumultuous Broadway production of Spider-man: Turn off the Dark. Earlier this year he was back in Russia and given carte blanche by Mariinsky Theater director Valery Gergiev to redesign the theater for what proved a spectacular version of Igor Stravinsky’s La sacre du Printemps for the Russian Rhythmic Gymnastic team.

Despite the choreographic globe-trotting, Ezralow said he was thrilled to be back in Philadelphia working with Joan Myers Brown and company. He bounded into Danco’s studio offices between rehearsals to talk about the company and more ways to make THE X-MAS PHILES as much of an annual moneymaker as The Nutcracker is for classical ballet companies.

“I love the energy in this building. The students are here, the company dancers are here, there is a sense of tradition and community that many companies are moving away from. It is a rare opportunity these days,” and adds without pause. “And I love and admire Joan. Her support of me has been so wonderful. She struggles to keep this company going in a city where it should be fully supported.” Daniel describes Danco as “a modern dance, Horton based, Ailey, Graham, really all of the flavors… [it] entertains new choreographers on a fantastic level.”

“Originally X-MAS PHILES was going to be just a shorter concert dance offering,” Ezralow recalled, “but it kept going on and on. Eventually, Joan and I started to see it as a full evening piece and create something unique. The dancers didn’t quite accept me at first, I came in with all of these different ideas, pulling things out of the air, with a ‘whatever connects’ approach.”

“[It’s] tricky to pick the right holiday songs and which versions and in what sequence that balance into a cohesive evening of dance with a through line of commentary,” he adds. Among the most inspired moments are Carmen McCrae’s vocal on “What are You Doing New Year’s Eve” about a single woman conjuring dates among three tuxedo gents, and a duet for two brothers dancing to Louis Armstrong narration on “‘Twas The Night Before Christmas”. There is also hilarious moments with the Reindeerettes caught in the headlights, smoking cigarette and otherwise smoldering as they dance in a calypso line to “Rudolf the Red Nose Reindeer”. On the more meditative side, there is the tableau of eight-foot shrouded Druids, in a foreboding procession, until they morph (ala Pilobolus) into a meditation on mother and child and a tableaux of a homeless man, whose true identity is revealed in the final moments of the show.

Ezralow’s 2005 additions included the elegant prologue with the dancers in silhouette scored to “Auld Lang Syne” and dancers in rubber boots tapping to “Jingle Bells”, bellowed out by the rock band Crash Test Dummies. For the 2015 version, Ezralow is using Eartha Kitt’s sizzling number, “Santa Baby” and jazz tracks from pianist Vince Guaraldi’s music to the TV classic A Charlie Brown Christmas. “Fifteen years ago I wasn’t into jazz, so my ear has changed,” Ezralow observed.

Since he was last here, the roster of Danco dancers has changed considerably and he is impressed with the standard and range Myers maintains as he continues to experiment with the piece. “I don’t necessarily have choreography that has a name,” he acknowledges, “In the studio I was playing with ideas and I decided on throwing in movement that comes from ballet syllabus and they just danced it right away, perfectly, and I was just reminded how good they are technically,” Ezralow noted, “And they are so willing to have a lot of fun onstage.”